A skate at the Winter Classic Community Rink 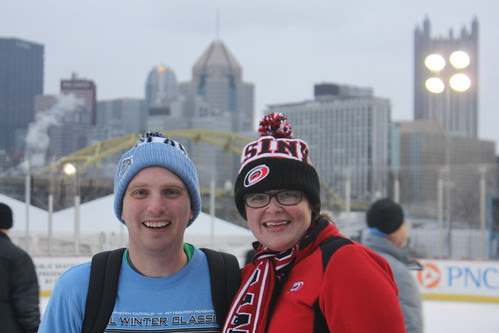 In what has become a Christmas tradition for Maggie and I, we've gone outdoor skating in Pittsburgh.  Last year, we skated at the public rink in PPG Plaza.  But this year was different, and on a Christmas Eve that is typical of a Pittsburgh winter gray, overcast, and just cold enough to support a fresh layer of snow in the morning, we had a memorable experience at the 2011 Winter Classic Community Rink.  The rink, which was constructed as part of the festivities for the 2011 Winter Classic between the Washington Capitals and Pittsburgh Penguins, is located just outside of Heinz Field.

In the time span of five days, the parking lot that sits between Stage AE and Heinz Field was transformed into a regulation ice rink where public skating, youth, high school, and college hockey games will take place.  Sure it's not a Rockfeller Center, but you really can't beat skating outside with an entire city skyline as a backdrop! 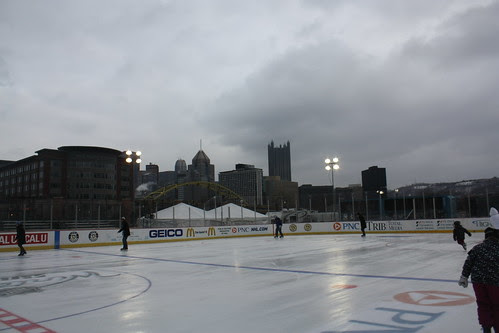 If you follow this blog or know me, you know that I am a big hockey fan.  So being able to skate at the Winter Classic Community Rink was an amazing experience.  The Winter Classic has in four short years become hockey's Super Bowl, an event that captures the interest of the hardcore and the casual fan.  What started out as a novelty on January 1, 2008 in Buffalo has become a staple of the hockey calendar and New Year's Day.

The goosebumps I felt while out on the ice and seeing and sharing the smiles and excitement of all that were on the ice that afternoon is something you don't see or get everyday.  Kids in their favorite Pittsburgh Penguin jerseys racing down the ice.  One child, who was a far superior skater than I, was making - or at least trying to - snow angels at center ice.  Fans and families who may not have tickets to the game taking photos on the rink as a souvenir from just being there. 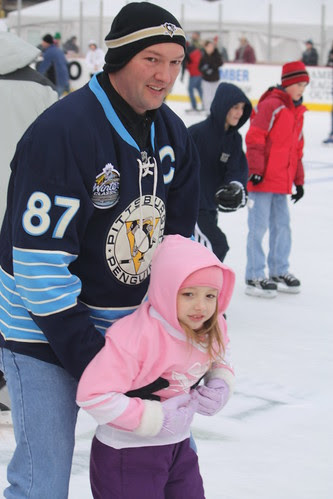 After spending some money on Winter Classic Memorabilia, which has been proudly added to our growing sports loft, we entered the rink when it opened to the public at 3 pm.  Maggie decked out head to toe in her Hurricanes gear attracted the attention of Pens fans and of the media.  We were both interviewed by KDKA-TV in Pittsburgh making the evening news.  We were also interviewed by Dan Rosen at NHL.Com.

As for skating, things started out rough.  We were on rental skates, but once we sat down again and tightened the skates, there was no trouble at all!  The atmosphere was entirely festive as more and more people began to make it onto the ice.  Even Santa stopped by - arriving on a zamboni! 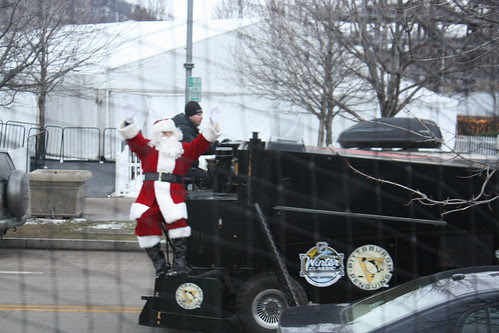 As for the Winter Classic, I am extremely excited about the event.  Throw in that it's in Pittsburgh and it adds that much more.  The game has become a celebration of hockey and its fans.  In an age where most big sporting events are more oriented to the corporate sponsors.  The NHL Winter Classic truly celebrates the roots of a sport that not only the fans love and enjoy the players do as well.

My entire Winter Classic Community Set can be found on flickr.

Frank Brosnan said…
Adam, You might want to check this out about I-74 construction in OH