By Doug November 28, 2010
I visit my old haunts of Oswego County, New York a few times a year. When I'm in Oswego, I tend to see a road sign honoring Oswego native Erik Cole, a National Hockey League player that many readers of this blog are aware plays for the Carolina Hurricanes. This sign rests next to a sign honoring my alma mater, SUNY Oswego, in their 2007 national championship in Division III men's ice hockey. It is certainly more noteworthy than the Shelby Lyons (who?) sign that used to adorn the entrances into the Port City of Central New York. 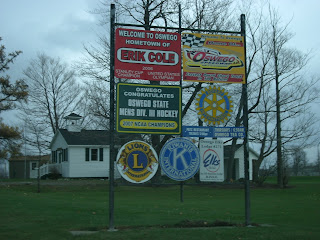 About ten miles to the south, in the city of Fulton, there is a new road sign honoring their hometown NHL player, Rob Schremp. Being someone who bleeds the blue and orange of the New York Islanders, this is especially nice to see, as the player affectionately nicknamed "Rob Schremp Hockey" has played for the Islanders for a couple of seasons now. 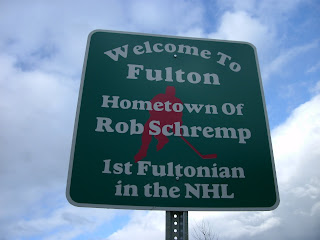 Fred said…
With any luck there will be an addition of this year to the sign for D-III Champions
8:49 PM

parkingsigns said…
really nice pics. thanks for this information about traffic & Parking Signs.
12:19 AM

Carl Patten said…
Awesome! Whenever there is a famous personality living in a certain state or town, they honor that person by making signages like this. I became so envious of them one time, that I actually dreamed of having a big signage of my own name in our state. LOL!
10:52 AM

Onsite Signs said…
This is great and useful information about all types of parking signs thanks for this information.
2:53 AM