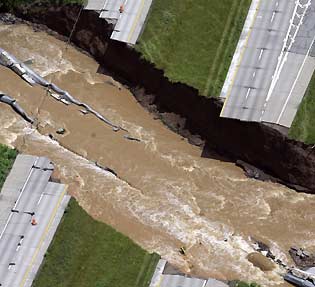 What you are looking at is an aerial shot of the I-88 roadway collapse over Carrs Creek. The lanes on the right are/were for I-88 Eastbound, and the beginning of the Exit 10 (NY 7 Unadilla) offramp. I-88 Westbound lanes are on the left.

You can see the remnants of the culvert in the center of the quiet stream turned rapids. The box trailer that is shown falling into the water would flow a mile downstream crashing into a bridge that carries NY 7 over the same creek.

The identites of the two truck drivers are still unknown.

The Susquehanna River is still approaching flood stage in Bainbridge, NY. The river is expected to crest at 28 feet sometime Thursday morning. Flood stage is 13'! The record level, 23.1' has already been eclipsed. It appears the river won't go below flood stage until after the weekend.

The NY State Thruway is not expected to reopen until at least noon tomorrow. I will try to get photos of the detour/roadblock.

This coming Thursday, I will be traveling home to PA and had planned to go down via I-88. If the situation improves enough for travel, I'll keep to that plan and try to take photos.

Of note: One of the most deadly highway/bridge collapses in our nation's history occurred on the New York State Thruway, Interstate 90. On April 5, 1987, a bridge carrying four lanes of the Thruway over the Schoharie Creek near Amsterdam collapsed. A number of vehicles and a tractor tralier fell or drove into the swollen creek killing ten people. Wikipedia reference with an animation of a second collapse of the bridge.