By Bob Malme May 10, 2014
On June 17, NCDOT plans to let the next construction project for its Greensboro Loop project, the northeast segment from US 70 to US 29. When work starts sometime later in the summer, this will be the third interstate construction project to get the go-ahead in the Greensboro/Guilford County, NC area in the past six months. Over the next few years this will make the Triad Area on North Carolina one of the busiest places for road construction in the country.

This project to build the next segment of I-840 from Bryan Blvd. to Battleground Avenue has been underway since last year. So far, the project has been noticeable due to all the land cleared for the future roadway. When finished I-840 will be extended to US 220 and the western half of the project will be nearly finished. The project had an added benefit, since the contract includes updating signage along the existing Loop, showing the future I-73 signage to be placed along the Loop and along Bryan Blvd. to the PTI Airport interchange. The sign changes will also occur along I-40, as this plan image shows: 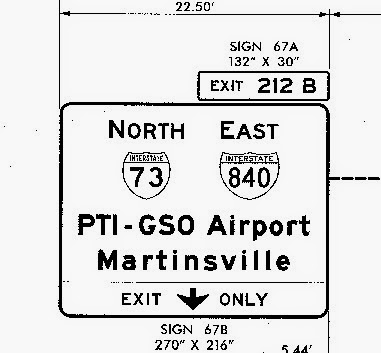 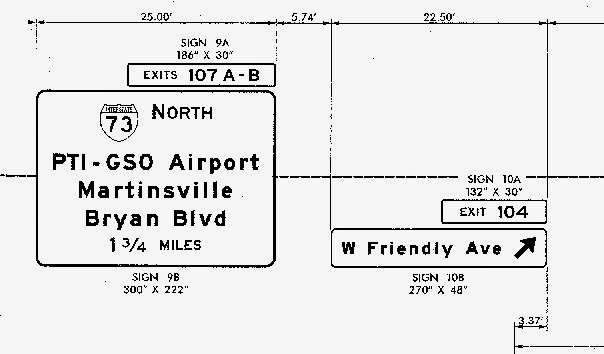 Apparently, NCDOT feels that since I-73 leaves the Loop it should exit itself, instead of I-840 getting the exit number. The plans also revealed the exit number for the PTI Airport exit will be 109: 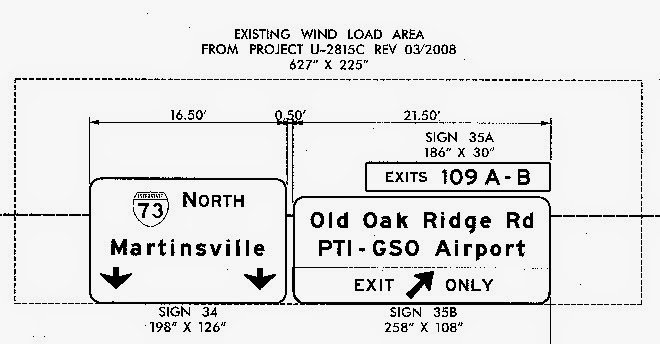 This exit ramp will then split giving the Airport traffic a separate ramp to use: 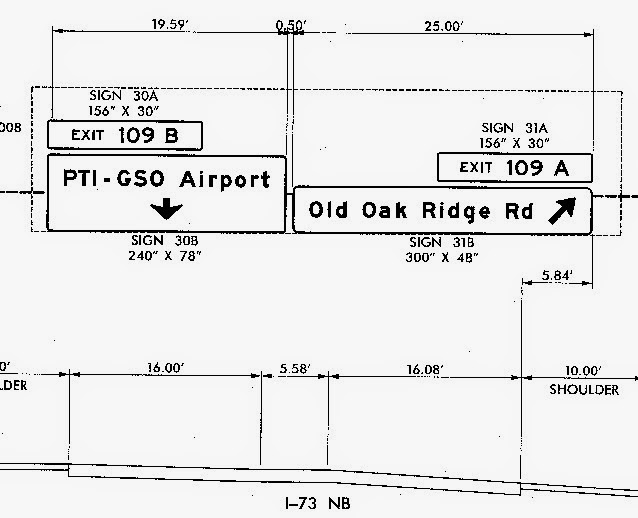 The contract will also replace the current Future I-73/I-840 signs with similar ones with interstate shields.
The northern end of the project will be the interchange with US 220 as the sign plan indicates: 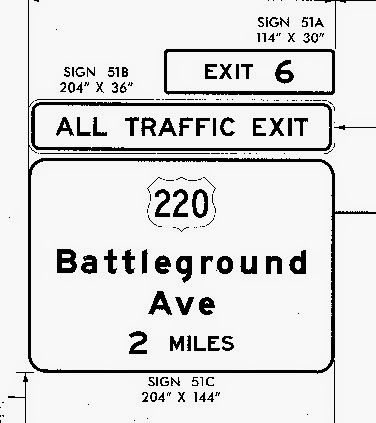 This project combined two previous projects the first to build the 'NC 68-US 220 Connector' that would take I-73 about 7 miles from north of the PTI Airport to US 220 near Summerfield and the 'I-73 Connector' to take I-73 from NC 68 to Bryan Blvd at the Airport exit. The NC 68-US 220 Connector project has been planned for years, however, the I-73 Connector project only gained approval within the last year and was pushed along by Airport interests who wanted a new taxiway that will be built as part of the project. The project is a Design-Build contract so no plans were released when the project was let. The published Request for Proposal documents, however, indicate that the tie-in between the two projects along NC 68 will not be an upgrade of the existing expressway, but the building of 2 parallel roadways for I-73 traffic on either side. The complete set of available documents for the project can be found on the contract's Letting Details website.

This is the second of three projects to build the eastern-half of the Greensboro Loop. This segment will continue the existing 2 mile segment that connected I-40/I-85 to US 70 about another 6 miles to US 29. NCDOT has gotten permission to sign both open segments of the Loop as I-840. Apparently though, to prevent any confusion as to 2 different I-840s before the entire Loop is completed, NCDOT will sign this segment only as I-785. NCDOT received permission from the FHWA for this designation in 2013. As the plan images below show, the signs will be designed to eventually have an I-840 shield also. Here's the future signage at the current split of I-40 East and I-85 South at the Loop: 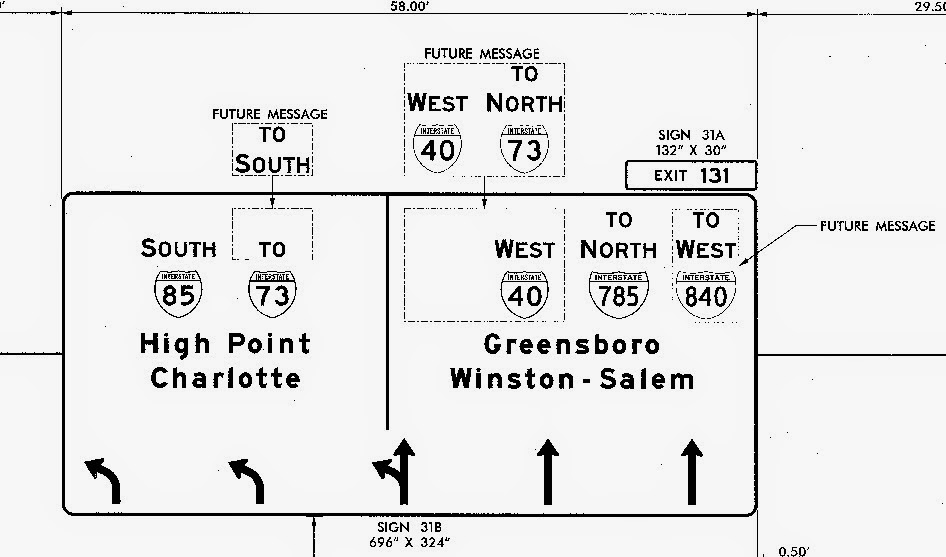 Here's signage on the opposite side of the Loop for I-40 East: 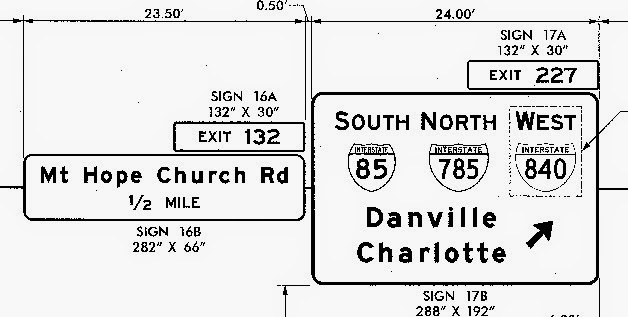 There will be two exits on the new segment, the first for Huffine Road:

The second for US 29, with US 29 North being the future route of I-785 and where it will leave the loop (hence future panels in this exit sign plan): 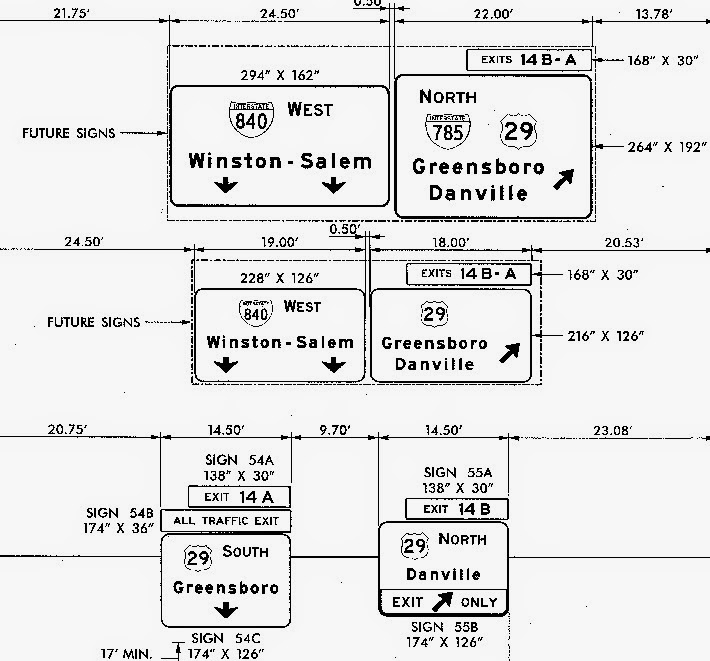 It seems unlikely that I-785 will be signed along US 29 until well after the Loop is constructed. Sign plans for US 29 at the Loop interchange, one that reveals future exit numbers with US 29 mileposts, seem to confirm this: 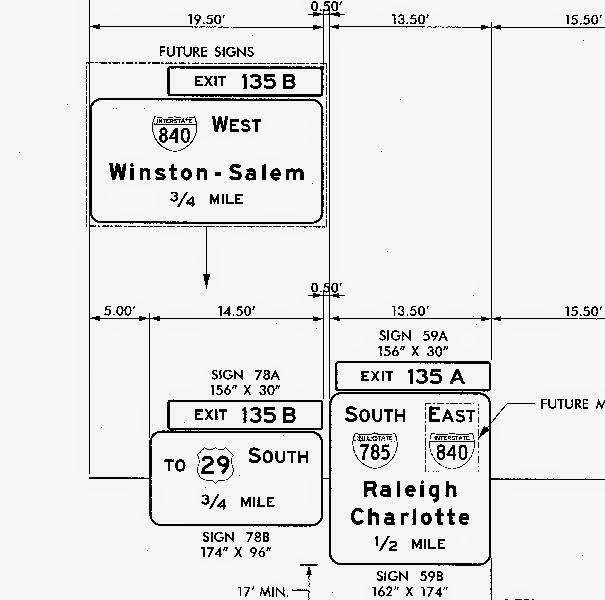 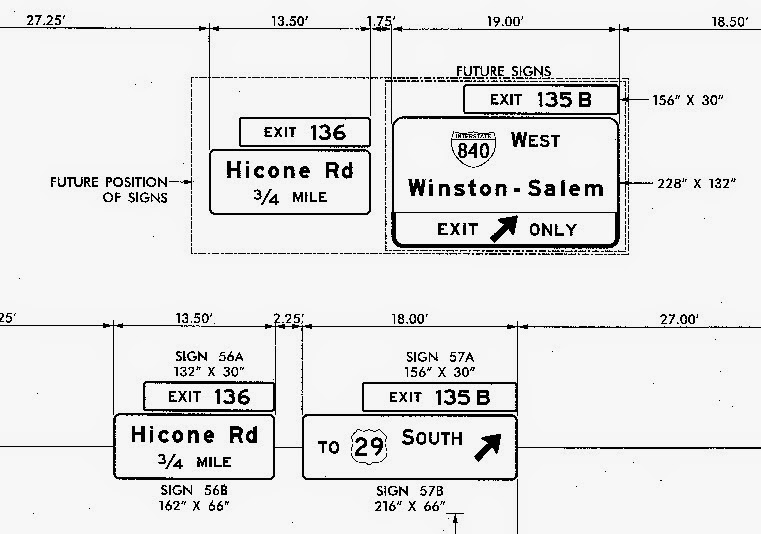 A full description of the Greensboro Loop projects can be found at NCDOT's Greensboro Urban Loop site.

Given these three projects, and the start of the Winston-Salem Northern Beltway (Future I-74) construction early next year in next-door Forsyth County, this will be an area highway construction enthusiasts will want to monitor for, at least, the next four or five years.