By Bob Malme January 03, 2014
Before I begin, since I was not able to get down to North Carolina this year, the first year since 1989, I would like to thank all those who provided me information and/or photos during this past year. This includes fellow blogger Adam Prince, along with posters on the AARoads Forum such as Strider and MBHockey13, and contributors to the Facebook group SoutheastRoads such as J. Austin Carter and Chris Curley. The photo below sums up the major accomplishments of 2013, finishing the I-74 freeway from High Point to Randleman and getting the routes officially signed along US 220: 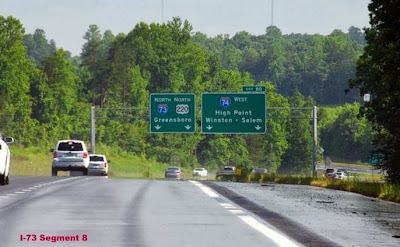 I will sum up the progress of each route during 2013 and then detail what is going to happen during 2014.

I. I-73 in 2013
The year saw a major milestone in the completion of I-73 in North Carolina, the upgrade of signing along the US 220 corridor to reflect its becoming an official interstate route. A contract to upgrade the signing started in March 2013 along the Greensboro Loop: 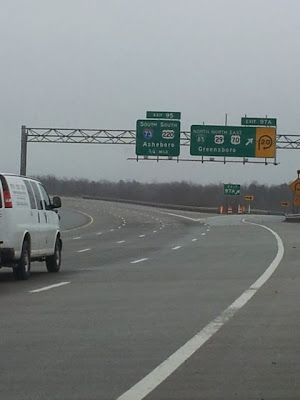 Starting with adding an I-73 shield to the existing US 220 signage, work continued in signing the remaining south I-73 signs in the spring and changing the exit numbers on signage around the I-73/I-85 interchange: 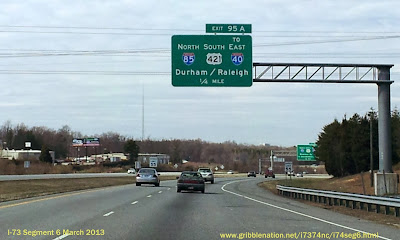 And heading south from I-85 as well with the addition of South I-73 to the existing signage at Old Randleman Road: 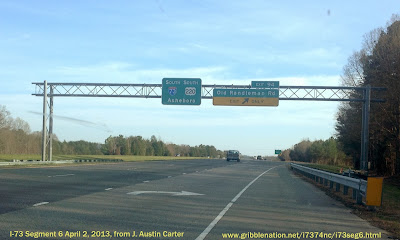 The contractor then moved to the southern end installing new signage and did not convert the final exit numbers in Guilford County until the fall. Meanwhile, the I-74 freeway opened (more below) in Randleman and the previously covered signs were uncovered: 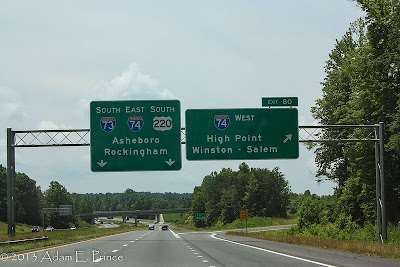 Once the freeway opened, the exit signage was renumbered and upgraded south of the I-74 interchange to match the exit numbering of the Asheboro segment upgraded in 2012: 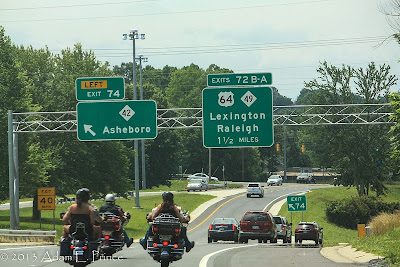 It was not until late fall that the new interstate shields went up as far north as Guilford County on the freeway: 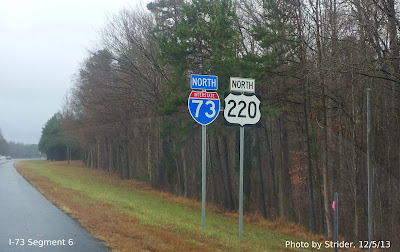 Or at the on-ramps at interchanges that in Guilford County never had any future shields: 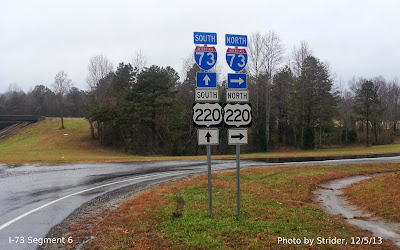 The signage upgrade contract supposedly was to be completed on December 31. It was 89% complete on November 30. Apparently the only task remaining, from reports of drivers along the corridor, was the removal of the future banners on the segment north of Ellerbe. Hopefully, the signs no longer look like this: 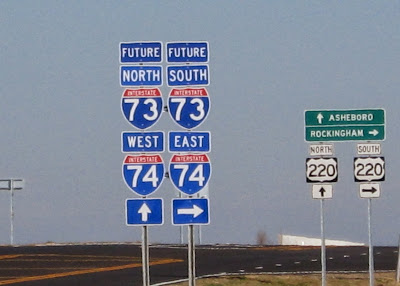 And the US 220 signs are gone too. Now I know why they were put on separate sign posts. By the end of the year I was also informed that this sign, at the Loop Ramp to I-73/US 220 was finally taken down: 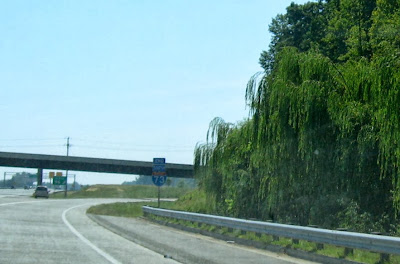 The other project regarding I-73 was the widening of US 220 north of Greensboro, the work has been slower than expected with only about 25% complete according to NCDOT at the end of November 2013. For the year I-73 officially grew by 42 miles, and is now signed along 78 miles of highway, not counting the portion of the Greensboro Loop, though officially I-73, still signed as Future I-73/I-840. 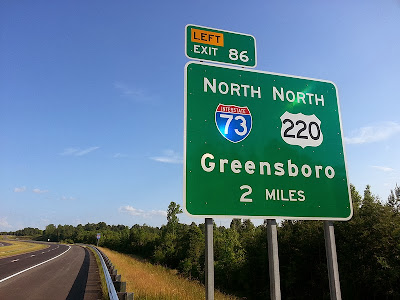 Though work was largely finished by the summer of 2012, problems with putting down another layer of asphalt along the route postponed the opening first from the fall of 2012 then to early 2013 and then finally to June. With the long wait, the opening was almost uneventful, the only surprise to many was that the 311 Bypass did not include US 311 for its last couple miles: 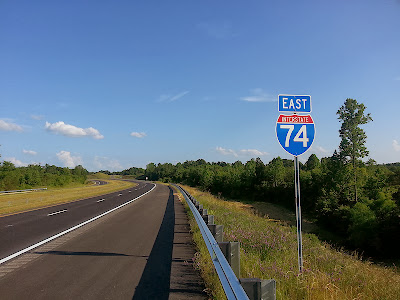 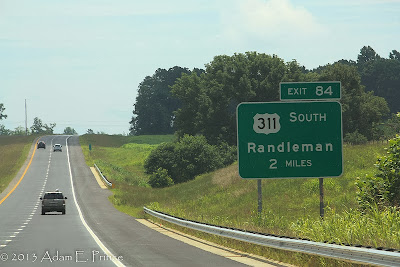 The remaining headlines for I-74 had to do with its official signing along US 220 and an announcement by NCDOT in April that the route had been approved for the US 311 freeway in Forsyth County with signs going up over the summer. This would make I-74 an official shortcut route for those heading east from Winston-Salem to the coast and wanting to avoid the Greensboro area. However, no signs went up either in the summer or the rest of the year. According to a Winston-Salem Journal correspondent, the re-signing was to be part of a contract to upgrade I-74 and other highway signage. A contract still not let. This leaves I-74 officially signed at the end of 2013 for a total of 115 miles, not counting US 311 in Forsyth County nor the 10 miles of Future I-74 along the US 74 Rockingham Bypass.

III. What's in Store for 2014
While 2013 marked the completion of several I-73 and I-74 projects, 2014 will be a new beginning for several others. Work is to start in the spring on the building of the US 220-NC 68 Connector paired with the building of the 'I-73 Connector' from NC 68 to Bryan Blvd. at the PTI Airport interchange. Documents released for the next segment of the Greensboro Loop indicate the PTI Airport exit will become Exit 109 when I-73 is complete. The design-build contract will also construct an I-73 freeway parallel to NC 68 between the 2 'Connector' projects and revise the current I-840/I-73/Bryan Blvd interchange, though the start of this part of the project has been postponed a year.

Also starting in January is the first phase of what was called the 'US 220 Rockingham Bypass.' This phase consists of upgrading three miles of current US 220 south of Ellerbe to what will be the interchange with the Bypass. This segment is the only part though that will have US 220 though as plans released in December show US 220 will remain on its current alignment:

As for I-74 related projects, the only one that is currently outstanding is the signage upgrade in Forsyth County, hopefully to be completed this year. The next construction project involving I-74 is the Winston-Salem Northern Beltway portion between US 158 and Business 40 currently scheduled to start in 2015. Perhaps there will be further news about I-74 east of I-95. The only news from the future route in this area this year was the addition of I-74 exit numbers to the NC 242 interchange opened in 2012. Work continues on building the Future I-73 freeway north of Greensboro but that may not be complete until the end of 2015, at the earliest. I hope to be able to get down to North Carolina in the upcoming year to document the progress of the past year or so. Meanwhile I will keep updating my I-73/I-74 in North Carolina site with all the latest news.