By Bob Malme July 12, 2013
I applied for an open records management position at the Vermont Transportation Agency (VTrans) a couple weeks ago. Last Friday I was asked to interview for the position on Thursday 7/11 (how convenient) and decided to take advantage of the situation by going up the day before and do some road tripping along the way. My trip would take me up I-93 from south of Boston to Barre, VT, just south of Montpelier off of I-89. Along the way I took a 'few' photos that I will share with you.

A. I-93 Signage South of Boston
I took a quick south detour on my way north to check out any progress on the sign replacement project along I-93 from Randolph to Boston. Nothing new truly to report. All the overhead sign foundations have been up between Randolph and Braintree for a at least a couple weeks. There is now apparently a lull between getting the foundations in and the signs and support structures up. This hopefully will start happening before the start of fall. As for the SE Expressway portion, no new signage of any sort this past month, either on the road or at intersecting highways.

B. I-93 Signage North of Boston
MassDOT now considers both signage projects north of Boston complete. I took many photos in a previous post last year. I used this opportunity to get photos of signs that were not up last time, or that were farther north than I had traveled before. Here's one of the newer assemblies that had not been replaced as of last summer: 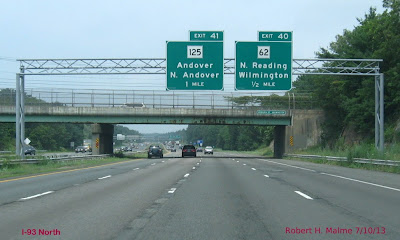 These two exits are in the Andover area. More progress, but no completion yet, of the sound wall construction along I-93 between Dascomb Road and MA 133: 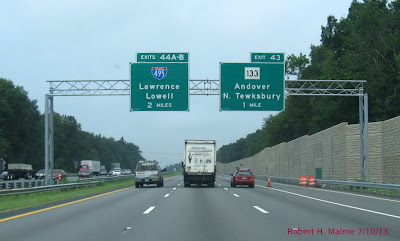 This overhead assembly may not have been put up until the wall was largely completed in this area. Here is one of the I-495 signs that had not been replaced: 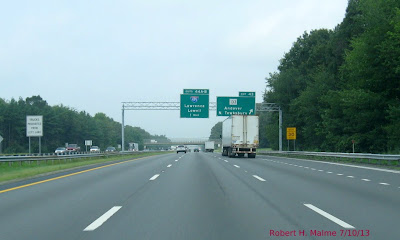 You can see the truck on the right is obeying the sign restricting their use of the far left lane. Here's signage after the I-495 interchange approaching River Road: 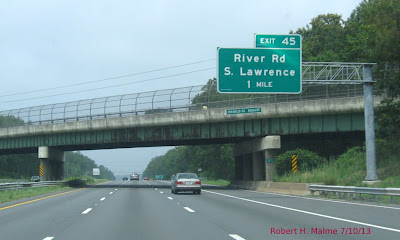 This is where I turned around during my last trip so all the rest of the signage is new, at least, to me. The view at the River Road interchange: 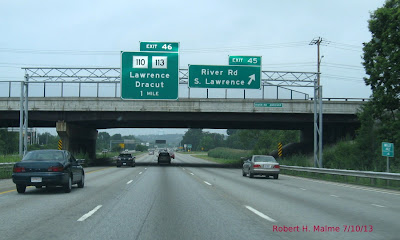 Will River Rd be Exit 42 when milepost based exit numbering is adopted? That would probably make MA 110/113 Exit 43. The exit numbers on this end are not far off mile-wise as closer to Boston. Here's more signage for MA 110/113: 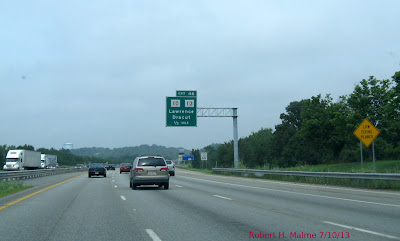 Apparently, based on the warning sign, this is near the Lawrence Airport. We are now approaching the last few exits in MA. Here is the first sign for the MA 213 exit: 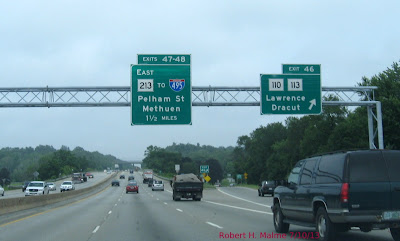 This overhead assembly at the MA 110/113 interchange crosses both sides of I-93. The next exit... 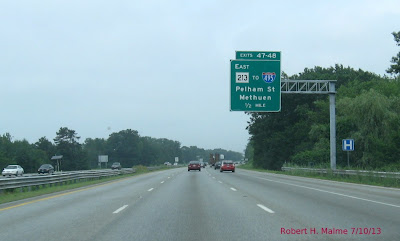 Is actually two exits which share the same C/D ramp as can be seen below: 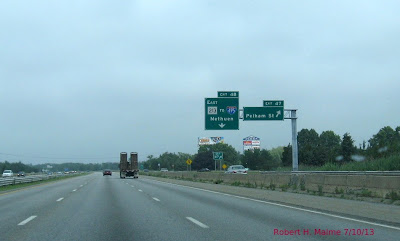 Under a mile-based system, would it make sense for these two exits to share the same number? Pelham St does have a separate ramp heading south.

C. I-93 Signage in New Hampshire
I had not driven I-93 north of the MA border in a long time. Certainly not before they started the current widening project between Salem and Manchester. The first few miles across the border are largely complete with four to sometimes five lanes of traffic. Here's the view approaching Exit 1: 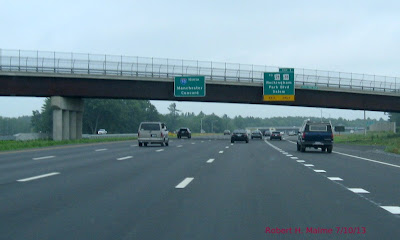 This will make it easier for all the MA residents going to the NH for liquor, I mean for fun at Canobie Lake Park just across the border. The widened interstate does not last long. The lanes start to disappear approaching Exit 2: 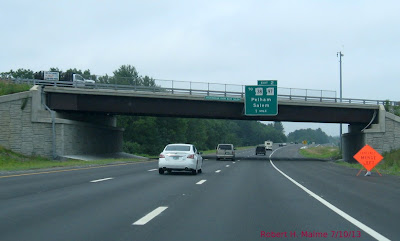 While there is a future 4th lane, it is currently not used. The end of the widened highway appears shortly before Exit 2: 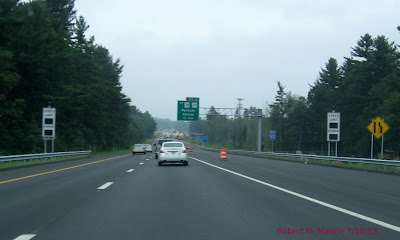 Notice the variable speed limit signs on both sides of the highway. Changeable for weather conditions or to switch to metric measurements in the future? (the far future, if at all?). Here's an area currently under construction: 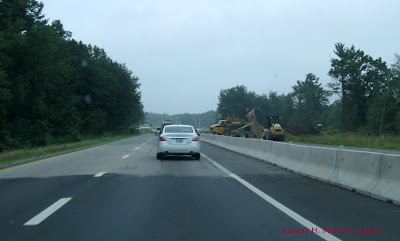 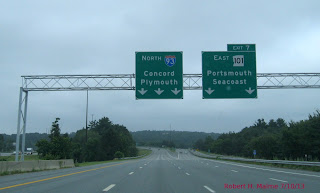 NH frugality appears to have squeezed a much large 3-lane sign into one with three arrows over one lane. The road here is still 'new' in my opinion, remembering when I-93 did not exist between the current I-293 (then I-193) intersection and the Everett Turnpike at Hooksett. On the way you see the first exit signs, and certainly not the last, for US 3: 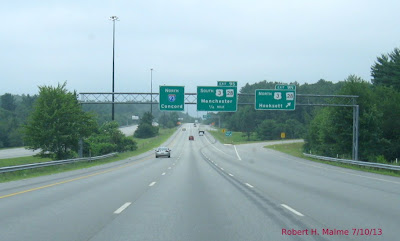 Here the narrow I-93 sign is sans arrows and looks better for it. Approaching the (not named) Everett Turnpike. No driver should have the excuse that they were not warned of an approaching toll: 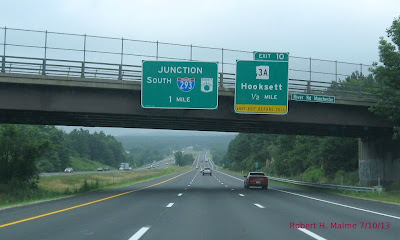 The yellow banner warns drivers that NH 3A is the last exit before toll. But is it? Look here-- 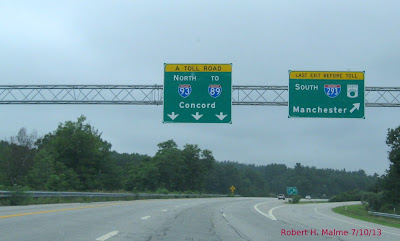 Here are two yellow toll banners signs at the ramp to the Everett Turnpike (and the 3 arrows on narrow I-93 sign again) with one indicating that it's the last exit before toll. Perhaps, if you exit I-293 South or follow it back to its southern end at I-93. If not, you'll see that banner again (see Part 2 post). The toll barrier in Hooksett has separated E-ZPass lanes though all toll lanes accept it. Beyond the toll are exit signs for I-89: 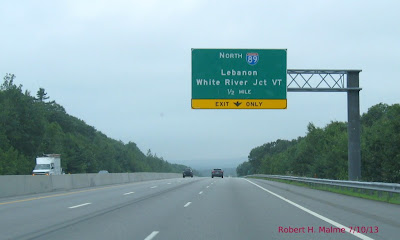 Being from MA, an overhead exit sign without an exit tab just looks wrong. Perhaps it will gain one if NH switches to mileage based exits like MA and CT. The on-ramp from I-93 North to I-89 North must have been done by the same design team that created the I-95 North ramp to I-85 South in Petersburg, a real tight curve. I took a few photos of signs on I-89 that look to have been recently replaced too: 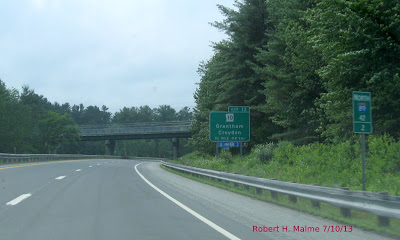 I chose the NH 10 (South) Exit at Mile 43 because this was a frequent destination when my parents owned land at the Eastman property complex just off the exit ramp. Never built a house there, but spent many a fall day collecting wood to take back for the winter in MA. The last exit sign I have is for one of the exits to Lebanon, NH: 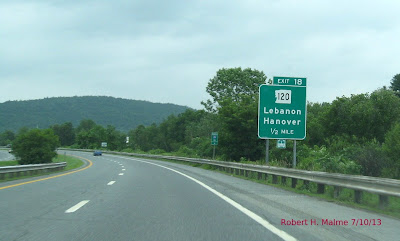 A place I would become quite familiar with over the next 24 or so hours.

But that's for Part 2: The Return.