By Adam February 22, 2012
Is the often rumored and talked about I-95 toll proposal going to happen in NC? Well, it just might.  Last week, the FHWA gave preliminary approval to NCDOT to be one of three pilot projects that will allow tolling of existing free Interstates to finance much needed and very expensive rehabilitation and improvement projects.

Over the past week and a half, NCDOT has held Public Information Hearings on the proposal covering everything to the widening of the highway, reconfiguration of interchanges, and of course tolling.  These meetings are being held in each of the counties Interstate 95 traverses through in North Carolina.

I went to the meeting held in Wilson on Tuesday, February 21st.  This was actually the first time I personally have ever attended a public information meeting on any type of highway or infrastructure project.  Billy Riddle was also in the area so he joined along.

We arrived at about 5:30.  And by the looks of the sign-up sheets there had been about 25-30 people that had arrived since the start of the session at 4 pm.  We were given a handout with general information about the project - and a magnet promoting the project's website, facebook page, and twitter feed. 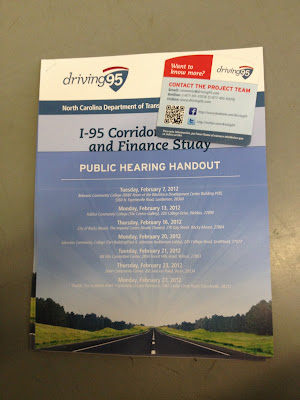 We sat through a five minute introductory video - and then went into a side conference room where we were able to see some conceptual details about the project and speak to NCDOT and other personnel involved in the project to this date. 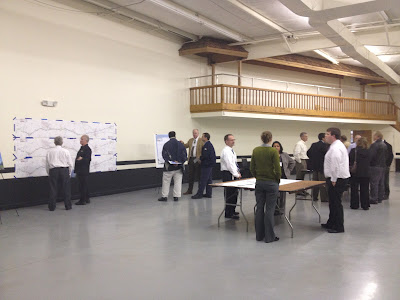 We learned quite a few things:
As for details of what the improved I-95 would include:
Now for the most controversial part - the tolls:
Commentary:

First, I am in favor of the toll proposal.  Construction projects are getting more involved and more costly.  And with the amount of our Interstate highways let alone our entire infrastructure reaching middle age and retirement - there's a lot of projects that need to be done and not a lot of money out there let alone money you can count on.  Toll roads aren't going to get voted homecoming queen.  In fact if a transportation forum could be a possible barometer, a number of out-of-state residents and truck drivers will consider bypassing I-95 in NC altogether. And there are already local residents protesting the tolls.

However, I-95 needs rebuilt, widened, made safer and it needed it yesterday.  Out of state drivers who are either continuing to destinations south or to our beaches will be paying a large portion of the bill. But that doesn't mean concerns that local drivers shouldn't get a break.  In my comments, I mentioned that a discounted toll should be considered and offered to residents living in any of the counties that I-95 travels through.  I am not sure how much of a discount but it should be significant and not bear an extreme burden on those living in some of the poorer areas of the state.

I also suggested that some of the interchanges with routes that tourists use to get to the coast be considered for tolls. US 158, US 264, US 64, US 70, I-40, NC 87, and US/I-74.  This may be tougher to implement - and may even be a bad idea - but if North Carolina residential tag holders would not be charged at these exits, it could be possible.

I learned a lot from this session.  And I am glad that I went.  Admittedly, Billy and I were most likely the youngest and also non-politician while we were there.  It was a good experience to attend and whether your are a roadgeek or not I would encourage anyone in the general public to go to these when they are able.  And don't be afraid to offer suggestions in the comment sheet or ask questions.

Bob Malme said…
The reaction of the attendees sounds similar to a public session I attended a couple weeks ago about MBTA fare increases and bus, subway and commuter bus and rail service cuts. Needless to say not too many people approved. But it was a civil conversation and people felt involved in the decision making process, even if they didn't like what was being proposed.
I attended one of the first I-95 information sessions when the report on how to fix the road was just started. Most people there thought the toll option would be the inevitable choice.
11:10 PM

James Mast said…
Interesting idea to toll the ramps for the routes to the coast. However, I don't agree about the I/US-74 one. That one was just recently built. If they were to attempt to toll that one, I would demand that NCDOT pays back the federal money they used to build it first.
12:30 AM

Anonymous said…
While I agree there will be a need for new revenues, I don't agree with tolling I-95 or any other highway. I think a better solution would be to increase vehicle registrations, increase the gas tax a penny or two, and increase the state sales tax 1%. I know taxes aren't popular but neither are tolls.
12:33 PM

Mapmikey said…
Although I see the logic in tolling exits for beach routes, one drawback is that two of those - US 158 and US 70 - are also major business locations where travelers would be getting off only to eat or gas up, then getting back on 95. This would result in addition cost to through motorists.

Even if people didn't shunpike based on the tolls, I for one will be avoiding 95 once construction starts which will (apparently) be ongoing for a number of years. I am a veteran of the unending paving improvement of I-95 south of Emporia.

Anonymous said…
I fail to the need for more lanes in NC. Do the existing lanes need to be better maintained and perhaps widened a bit; yes.
6:18 PM

Anonymous said…
Raise gas tax? NO.
Mainly because people traveling on the road (20%) go straight through - without stopping. I would estimate that 50% of the cars are crossing the state, they may stop for food or something yet they are too many trucks and cars just using the road and not paying anything into upkeep.

if you don't think it needs an extra lane, you may not have driven it lately.

The bridges could be built for the eight lanes from VA to SC. The widening can be done is stages 6 lanes then 8 as needed.

I would rather see 6 lanes the entire length first rather than 8 lanes in the center with the Northern and Southern ends still at 4 lanes.